Specifically, its aims and objectives are:

If you would like more information about CIO, please email us at [email protected], or you may mail your inquiry to:

Up until 1992, CIO activities were very much focused on bringing the community together. Under the Presidency of Mr. Narasimha Shenoy, the organization was recognized by the political parties and government agencies at local, state, and federal levels as a representative body of Asian Indians in Greater Philadelphia. The annual Penn’s Landing Program (Festival of India) started in August of 1993, and is very successful in projecting the cultural activity of Asian Indians to mainstream America.

From 1997 through 1998, CIO observed a yearlong celebration of India’s 50th Anniversary of Independence. Major area institutions, including the Philadelphia Museum of Art, Balch Institute, Fairmont Park Art Association, South Asia Regional Study Center of the University of Pennsylvania, also joined in observing the celebration. The NANDI sculpture mounted at Penn’s Landing was rededicated as a part of the 50th Anniversary celebration (during the Festival of India 1998, Penn’s Landing, Philadelphia, Pennsylvania).

In 1991, CIO adopted the rules and regulations to establish, administer, and maintain a fund to provide scholarships to area students in need. During the early part of 1997, CIO was a signatory to establish an Asian Fund with the Philadelphia Foundation, and made a contribution in establishing the fund. During 1996, CIO also contributed to the Philadelphia Police Fund. These contributions were made possible on account of the generous contributions made by Mr. Narasimha Shenoy.

CIO is expanding its activity to address the social and welfare needs of the community. CIO celebrates India Day annually, in January, to coincide with India’s Republic Day. During the month of May Inter-Organizational Dance competitions are being conducted and Gandhi Jayanthi in October since 1998. CIO is conducting Inter-Organizational Sports Competitions since 1997.

You may have missed 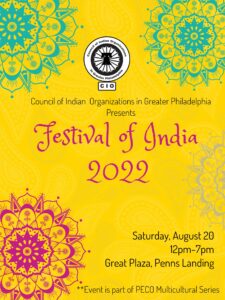 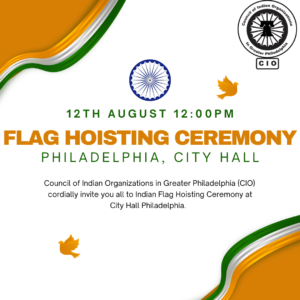 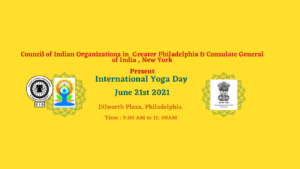 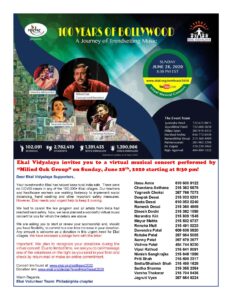